Behind the Scenes of our Professional Displays 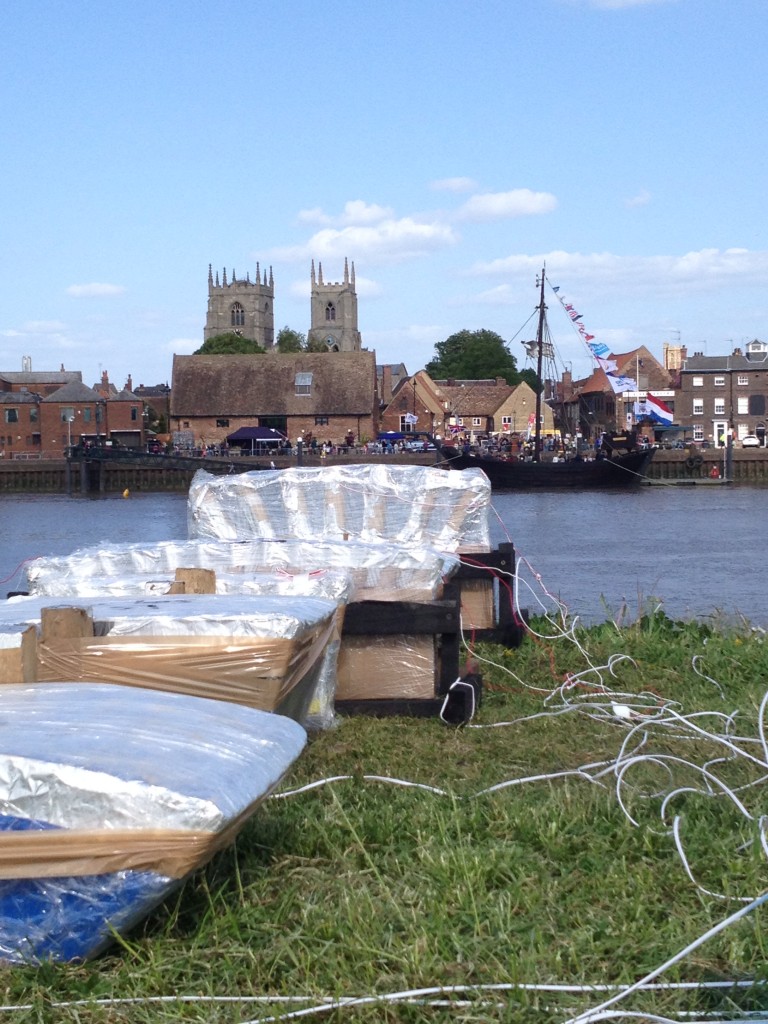 Fireworks to me are primary a form of art expression rather than chemistry, however others may argue the difference, as an amazing amount of knowledge and skills go into the making of the products we use today.

The chemistry involved has developed over centuries, first being discovered in China in the form of basic Gunpowder. In England it was notably used by Guy Fakes in the Gun Powder Plot and that’s why we get to celebrate 5th November in our Calendar every year, although fireworks are used to add drama and grandeur to any special occasions now.

Today blackpowder is used to lift and burst the fireworks we use. Blackpowder is made up from three ingredients in a special ratio, Potassium nitrate, charcoal and sulphur.

The colours for the bright flying stars you see in fireworks are made from various chemicals to allow it to burn and bind then a chemical is added for the colours required:

Blue was one of the last and hardest colours to be made.

From blue, Purple could then be made combining Copper and Strontium compounds.

These special coloured stars are laid out in the various patterns within the shells casing to create the many different effects like peonies, chrysanthemums, dahlias, brocade, strobes and willows we use in the sky. Other effects like whistles, fish, falling leaves, crossettes, dragon eggs and many more are also used. 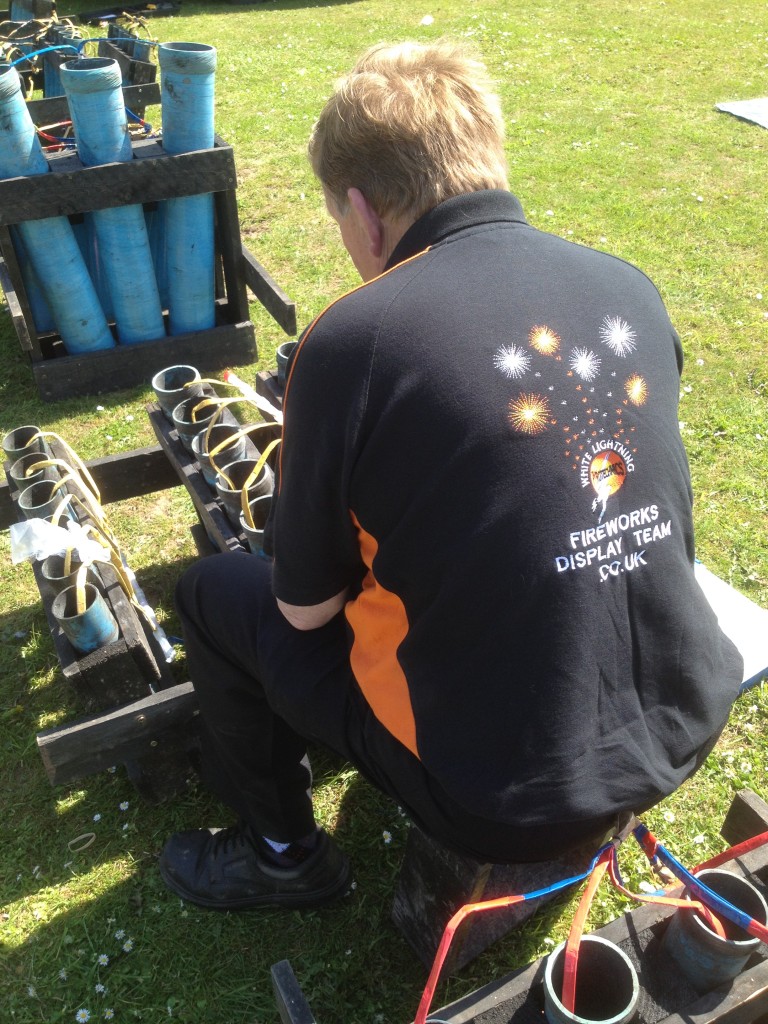 In our professional displays we mainly use the following in a huge variety of sizes from 14mm to 350mm.

Aerial Shell: Where coloured stars/effects are enclosed in a card ball (shell) and launched from a mortar tube with a lifting charge. These are majority of the big bursts you will see in our displays. We also have special shells which can burst on water called Aquatic shells which some of you may have seen us use on Kings Lynn River this year at The Hanse Festival and Festival Too.

Cake or barrage: A multi-shot firework in which the effects or shells are placed in single tubes and joined together to make many firings. These can be straight up or angled to create z-firing patterns or fans in the sky.

Candle: A firework consisting of a shell, effect or just a comet tail in a card tube. These have many shots stacked on top of each other.

Fountain/Gerb: A static firework that creates a column of sparks in a fountain effect. These can also be used in lancework (fire writing) or other special effects like waterfalls.

Mine: A firework that ejects stars/effect upwards from its position, this creates fast intense effect.

I know all of you are thinking she has missed the rockets off, however we don’t use rockets as they are not very predictable and of course have a stick which inevitably will come back down to earth!

It is then up to the designer to know and use these effects to create a piece of art in the sky.

One of my favourite quote sums us up nicely;

“The Five Elements of a Fireworker. The talent of the artist, the hand of the sculptor, the heart of the poet, the eye of the painter and the courage of the warrior” – Passfire Jesse Veverka.

The design stage of producing our display is very important to give the best possible display to the spectators that the size and position of the site allows for and the budget given. This is considered through site surveys and detailed risk assessments to allow us to see what is possible before the designing starts. Symmetry is a key design element as well as using the colours and effects in a choreographed way creating flow and movement to the display building to a crescendo of colour and sound in the finale. This is done by giving each firework a firing time. The effect/bust time from this firing time can be anywhere form instant to 6 seconds before the bursts, so time needs to be allowed rise/delay time to give an accurate firing time. Each firework will also have a position and angle to be fired from to produce the layers, spread, patterns and coverage in the sky. Once this plan is produced each firework has to be found from stock, labelled and any timing delays attached between fireworks or special fuse added to work with the sequencing designed. Any large multi-shot cakes/barrages are prepped for the Great British weather by a nice layer of cling-film.

On site all the large mortar tubes to fire the shells from and all the racks to hold things like candles and cakes are set out in the relevant order in accordance to the show plan. These are all fixed into place firmly so nothing can move. Then the fireworks can be loaded into the correct positions. These then have an electrical igniters put into the black match fuse to get an instant firing on pressing the relevant button; this also increases the amount of locations we can fire from at one time, making the displays more artistic, while using a bigger sky-scape. This gives us complete control over timing and to stop, change or remove certain fireworks if needed. Now they are all carefully covered in a layer of tin foil to stop the sparks from an earlier fired firework setting of one not ready to go yet. Once it is fully covered and water proofed each firework has to have a wire from the electrical igniters to the relevant number in the correct junction box for that firing position on the show plan. 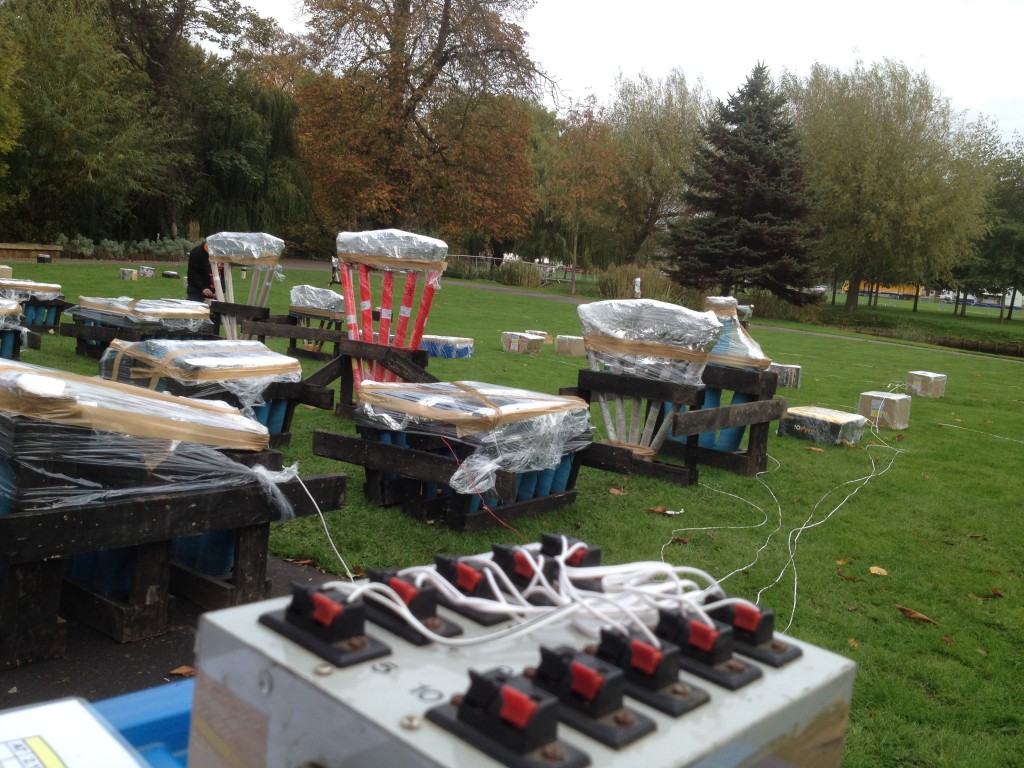 Once this is complete the main cables are run out to the firing system and a continuity check done to see if each circuit is live with no faults and ready to go. Now we just wait to show time…

Stay safe, have fun and enjoy your fireworks season, be it in your garden or at a public event.