This year Whitelightning prepared a spectacular fireworks display at the Hanse Festival in Kings Lynn to a crowd of several thousand esteemed guests.

The King’s Lynn Hanse Festival took place in May over two sunny days featuring a host of musical acts with people dressed up in mediaeval costumes that were meticulously prepared. The event was also attended by some delightful characters strolling through King’s Lynn’s town square along with fire breathers and rather splendid knights in shining armour on horseback.

Dating back to the 13th century, the Hanseatic League was a confederation of market towns and guilds working together to protect economic and diplomatic interests. The annual festival celebrates King’s Lynn’s cultural heritage and historic ties with the Hanseatic League and invites residents as well as visitors to enjoy themselves with food, drink, public performances and specially prepared culinary delights.

Working with the Borough Council of King’s Lynn & West Norfolk, Whitelightning prepared the fireworks display overlooking the River Great Ouse to provide a thrilling finale, celebrating Hanseatic heritage and the 10-year anniversary of the borough’s membership of The Hanseatic League.

Discover how the show was prepared and what some of the challenges were before the fireworks display came to fruition.

How did you approach the setup of the Hanse Kings Lynn Fireworks display?

The setup of course starts with the design and because of the amazing length of site along the water’s edge we had lots of scope to make full use of the width of the site to fill the sky with complex chase sequences, crossovers and layering in the sky to many large aerial bursts. This is the type of site you dream for as a designer.

A lot of the work is done back at the yard where fireworks are pulled from the stock we have and any time delays and fuses are added to them before being boxed up into sequences and loaded onto our vehicles along with all the racks, mortar tubes and equipment needed.

On the day we start on site at 8am we have a team of people split into two, one working on the many position technical bits along the top of the bank and the others working on getting all the aerial shells in position and fused together. We all come back together to wire this all up to our firing system and do checks until everything is good to go.

What were some of the challenges you faced in preparing for the festival?

The festival is very well organised and didn’t really cause any challenges. The main thing is to get the communication between all teams ie, harbour master, security, emergency services and the council so that we can work together seamlessly.

Due to the special nature of the aquatic fireworks we were using which landed in the centre of the river, we did have to get the river closed for a small period of time with spotters on the river side to make sure there was the all clear, and then conveying this to the firer. We took a considerable time setting up these special aquatic fireworks so they were set at the correct angle and distance to land exactly where we wanted them and oh WOW they were stunning. A person in the crowd reported, the rocket’s up into the air, its creating an amazing splitting coloured curtain over the water. Then everyone goes, “WOW!!!! That was amazing!” That’s why I do this job, for those moments which cause a fantastic reaction from the crowd…happy days. 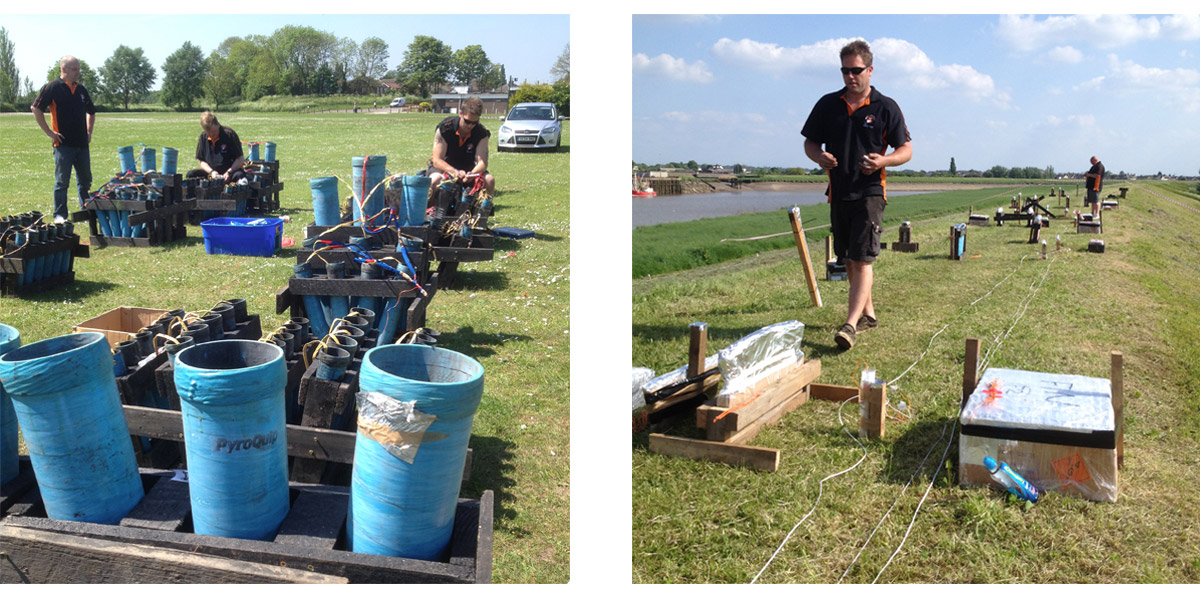 What kind of equipment did you use to complete the setup along the river?

All the fireworks have special frames they are fixed to or fibreglass tubes they go into. These special racks are laid out to the show plan and are fixed securely together or staked into the ground so nothing can move or fall over.

Once all the racks are laid out and loaded with fireworks, small electrical igniters are inserted into each one. Then they are all covered in tinfoil. This is to stop one firework setting off another before it is due to go off. All these are then waterproofed because of our great British weather!

Next, each electrical igniter has to be put in the correct electric junction box in the correct position. Once this is done a main cable is run from each junction box to the firing system where checks will be run to check the circuits are ready to fire. Then comes the waiting..till the countdown begins.

If you are looking to plan an event feel free to get in contact with us for a free quote. We also provide a selection of display kits, rockets and fireworks for families and birthday parties.